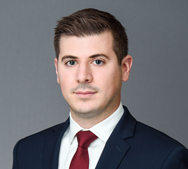 Anthony Balzofiore is an associate in the New York office of Gibson, Dunn & Crutcher.

Prior to law school, Mr. Balzofiore was a senior associate in KPMG’s forensic accounting department, and a financial analyst at iHeartMedia.  He received a Bachelor of Science degree in Public Accounting from Fordham University in 2012 and a Master of Business Administration degree from Monmouth University in 2013.

Mr. Balzofiore is admitted to practice in the State of New York.