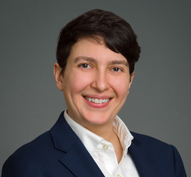 Shireen A. Barday is a litigation partner in the New York office of Gibson, Dunn & Crutcher.

Ms. Barday has served as a principal in a wide range of complex commercial litigation matters, with specialized expertise in business litigation involving fiduciary duties and allegations of fraud or willful misconduct.  Ms. Barday has served as lead counsel in litigation across the U.S. relating to M&A transactions, lending activities, securities and corporate governance issues and contested restructuring matters.  Ms. Barday regularly appears in Delaware and other courts around the country where she has represented directors, officers and issuers in class action and other litigation.

Ms. Barday is also committed to pro bono work. Every year she has been in private practice, Ms. Barday has been awarded The Legal Aid Society’s Pro Bono Publico Award for her work in the area of post-conviction relief.  Ms. Barday serves on the board of directors of the Off-Broadway Theater, Primary Stages and the National Center for Law & Economic Justice.  She is also a member of the Magistrate Judge Merit Selection Panel for the Southern District of New York and Consilio’s Advisory Panel for Diversity & Inclusion.

Other Restructuring and Bankruptcy Matters*