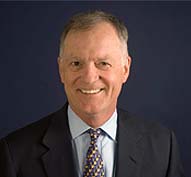 Mr. Brown is a trial lawyer concentrating his practice on patent, trademark and trade secret trials, as well as complex commercial, class action, antitrust and legal malpractice defense litigation and arbitration, both domestic and international.  He has tried dozens of civil and criminal cases, and scores of arbitrations.  Mr. Brown has extensive experience in civil, multi-district litigation and often coordinates the work of counsel in multiple jurisdictions.  He is frequently asked to “fix” problem cases where current counsel is being replaced or supplemented before trial.  Mr. Brown has led teams in cases litigated in federal or state courts in, California, Delaware, Idaho, New York, Oregon, Georgia, Tennessee, Texas, Virginia, Utah and Washington.  He also has significant experience in representing major corporations in prosecuting cases as a plaintiff.  Mr. Brown worked on criminal matters as a federal criminal investigator and as a prosecutor with the San Francisco District Attorney’s Office on a public service leave of absence.

From 2013-2014, Mr. Brown was President of the California Bar Foundation—the center of philanthropy for California’s lawyers; a major force in diversity efforts for the bar; and a leader in educating Californians about their government and their responsibilities as citizens of California.

Mr. Brown was Partner-in-Charge of the San Francisco office of Gibson Dunn from 2005-2011.

He teaches trial skills for the National Institute of Trial Advocacy and for the Intensive Advocacy Program at the University of San Francisco School of Law.  He has also been a guest lecturer at Boalt Hall on trial techniques and has taught advocacy skills for the Practicing Law Institute.

Mr. Brown has published numerous articles on international and domestic arbitration, and litigation management.  Mr. Brown is a frequent lecturer on various litigation topics throughout the United States as well as in Germany, England, Japan, and Korea.