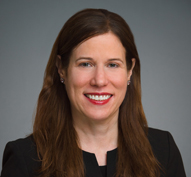 Jennifer L. Conn is a litigation partner in the New York office of Gibson, Dunn & Crutcher.  She is a member of Gibson Dunn’s Securities Litigation, Securities Enforcement, Appellate, and Privacy, Cybersecurity and Data Innovation Practice Groups.

Ms. Conn is a commercial litigator, who has extensive experience in a wide range of complex commercial litigation matters, with a particular focus on those matters involving securities, financial services, accounting, antitrust, and information technology.

Prior to joining Gibson Dunn, Ms. Conn was an associate with Cravath, Swaine & Moore in New York.  She also was a law clerk for the Honorable Lawrence M. McKenna, United States District Judge for the Southern District of New York.

In addition to her practice at the firm, Ms. Conn is an Adjunct Professor of Law at Columbia University School of Law, lecturing on securities litigation.

Ms. Conn also regularly writes and speaks on various subjects, particularly those relating to securities litigation.  For the past five years, she has been the co-editor and a co-author of the Firm’s Practicing Law Institute Treatise, Securities Litigation: A Practitioner’s Guide.