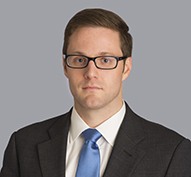 Kellam M. Conover is a senior associate in the Washington, D.C. office of Gibson, Dunn & Crutcher.  He practices in the firm’s Litigation Department and is a member of its Appellate and Constitutional Law Practice Group.

Mr. Conover represents clients from a wide variety of industries in high-stakes appellate and administrative law matters, ranging from constitutional law, to securities fraud, patent, government contracts, and Administrative Procedure Act cases.  Mr. Conover has represented parties before numerous federal appellate courts, including the Supreme Court of the United States, and the Second, Third, Eighth, Ninth, D.C., and Federal Circuits.  He was named by Best Lawyers as “One to Watch” in both Appellate Practice and Administrative Law in 2022 and 2023.

Mr. Conover maintains an active pro bono practice.  In 2019, the team he led received DV LEAP’s Pro Bono Team of the Year award for their work in the Supreme Court on behalf of the petitioner in Monasky v. Taglieri, 140 S. Ct. 719 (2019).

Before rejoining the firm, Mr. Conover clerked for the Honorable Raymond C. Fisher of the United States Court of Appeals for the Ninth Circuit.