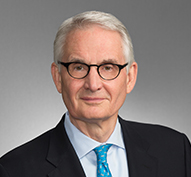 Bill Dawson is a partner in the Dallas and Houston offices of Gibson, Dunn & Crutcher.  He is a seasoned, bet-the-company trial lawyer.

In 2016, Mr. Dawson was identified as a “Lion of the Texas Bar” by The Texas Lawbook for his “extraordinary contribution to the legal profession.”  He was named Best Lawyers‘ “Lawyer of the Year” for Securities Law – Dallas in 2016 and 2014 as well as Bet-the-Company Litigation – Dallas in 2011.  Texas Lawyer also named him Litigator of the Week for a March 2014 trial victory against the Sierra Club on behalf of Energy Future Holdings and Luminant in a Clean Air Act case filed in federal district court for the Western District of Texas.  In July 2015, The Am Law Litigation Daily named him as its Litigator of the Week for winning dismissal of novel False Claims Act claims against Sanofi-Aventis that were brought by generic drug manufacturer Amphastar Pharmaceuticals.

Additional recognition includes consistent inclusion in Chambers USA: America’s Leading Lawyers for Business and in The Best Lawyers in America® for bet-the-company, commercial litigation, litigation – intellectual property, and securities law.  Mr. Dawson has been named among the “Leading Individuals” in Texas Dispute Resolution by Practical Law Company’s Which lawyer? Yearbook, recognized as a Super Lawyer, and titled a “Local Litigation Star” in Texas for IP, Energy Law, Securities Litigation, and Professional Liability by Euromoney’s Benchmark Litigation.  He was also named to the International Who’s Who of Business Lawyers in commercial litigation.

Mr. Dawson received his J.D. with highest honors from Texas Tech University.  He also holds a B.B.A.  He was awarded the Distinguished Alumni Award by the law school in April 2012 and was the law school’s commencement speaker in December 2013.

Mr. Dawson is a Fellow in the American College of Trial Lawyers where he has served as chair of the Science and Technology in the Courts Committee, and currently serves on the Texas State Committee.  He is also a Fellow in the International Academy of Trial Lawyers.  He is an active member in the American Law Institute, most recently serving as an Adviser on the ALI Project, the Restatement of the Law Third Torts Liability for Economic Harm.  He is a member of the Fifth Circuit Bar Association.