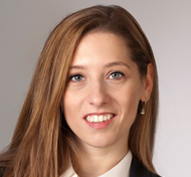 Vasiliki Dolka is a Greek qualified lawyer and a member of the Athens and Brussels Bars, based in the Brussels office of Gibson, Dunn & Crutcher. She is a member of the firm’s Antitrust and Competition Group.

In the field of International Trade Law, Ms. Dolka has experience advising on all aspects of anti-dumping investigations before the European Commission, on the implications of trade defense measures as well as on EU regulatory matters of import and export duties.

Ms. Dolka graduated from the National and Kapodistrian University of Athens – Faculty of Law in 2013 and received an LL.M. degree in European Law from the College of Europe in Bruges, in 2015. In 2018, Ms. Dolka also received a Postgraduate Diploma in UK, EU and US Copyright law from King’s College London.

Ms. Dolka is a native Greek speaker, fluent in English and French and is also proficient in German.