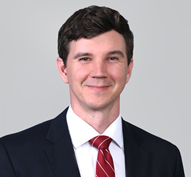 James Erselius is a litigation associate in the Los Angeles office of Gibson, Dunn & Crutcher.

Mr. Erselius earned his law degree in 2014 from Columbia Law School, where he was a Harlan Fiske Stone Scholar and served as an editor of the Human Rights Law Review. He received his Bachelor of Arts degree in Business Economics from UCLA in 2009. Prior to law school, Mr. Erselius was an associate with PricewaterhouseCoopers.

Prior to joining Gibson Dunn, Mr. Erselius was an Environment, Land & Resources associate at the firm of Latham & Watkins and in-house counsel for a nonprofit organization.