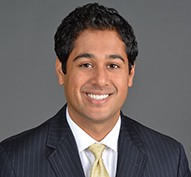 Vivek Gopalan is an associate in the San Francisco office of Gibson, Dunn & Crutcher.  He practices in the firm’s Litigation Department, focusing on high stakes litigation, counseling, and investigations, with a particular emphasis on securities, white collar, and commercial matters.

Prior to joining Gibson, Dunn & Crutcher, Mr. Gopalan served as a law clerk for the Honorable Robert C. Brack of the United States District Court for the District of New Mexico.

Mr. Gopalan received his J.D. from the University of California, Berkeley, School of Law in 2013, where he was an Article Editor for the Berkeley Journal of Criminal Law. While in law school, Mr. Gopalan externed in the Consumer Law Section of the California Department of Justice, and served as a judicial extern to the Honorable Lucy H. Koh, United States District Court, Northern District of California. Mr. Gopalan earned his B.A., cum laude, in History and Political Science in 2007 from Rice University. Before practicing law, Mr. Gopalan served as a legislative assistant and finance director to former Congressman Harry Teague of New Mexico.

Mr. Gopalan is a member of the California state bar and is admitted to practice in a number of federal district courts, as well as the U.S. Court of Appeals for the Ninth Circuit.