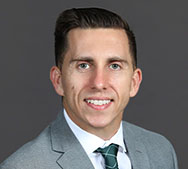 Mr. Guiulfo represents companies in a wide variety of matters including business-related disputes, with an emphasis on securities litigation and complex commercial litigation.  Mr. Guiulfo also has experience representing clients through internal and governmental investigations by federal and state law enforcement agencies and regulators, including the Department of Justice (DOJ), the Securities and Exchange Commission (SEC), and state attorneys general.

Mr. Guiulfo received his Juris Doctor from New York University School of Law in 2016 where he was the senior executive editor for the Journal of Law & Liberty.  Mr. Guiulfo graduated from the University of California, Berkeley in 2011 with a B.S. in Economics and B.A. in Political Science.

Prior to joining Gibson Dunn, Mr. Guiulfo previously worked as a litigation associate at Weil, Gotshal & Manges LLP in New York and at Kirkland & Ellis LLP in San Francisco.

Mr. Guiulfo is admitted to practice law in the States of California and New York.