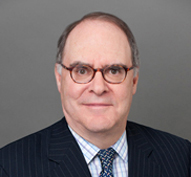 John A. Herfort is a partner in the New York office of Gibson, Dunn & Crutcher.  Mr. Herfort is a member of the Gibson Dunn Litigation Practice Group and focuses on antitrust litigation and counseling and complex commercial litigation.

He is co-author of the ABA’s Antitrust Section Monograph, “Merger Standards under U.S. Antitrust Laws” (1981), a contributor to the ABA volume “Antitrust Law Developments” published in 1984, and co-author of articles on merger enforcement, predatory pricing and patent antitrust issues published in the 1990s and 2003.  Mr. Herfort has lectured on various antitrust issues at American Bar Association Antitrust Section annual meetings (on mergers and Robinson-Patman Act issues) and at the Practising Law Institute (on vertical restraints).  He has also spoken at the National CLE Antitrust program in Steamboat Springs on the Microsoft litigation.  Mr. Herfort is routinely ranked as one of New York’s leading antitrust lawyers by Chambers USA:  America’s Leading Lawyers for Business, and by The Best Lawyers in America©   and Best Lawyers© New York.  In Chambers, Mr. Herfort is described as a “tremendous lawyer” who is “brilliant both substantively and strategically” and “thinks several steps ahead – a very talented individual.”  Mr. Herfort is a member of the American and New York State Bar Associations, and the Association of the Bar of the City of New York.

Mr. Herfort joined Gibson Dunn in 1984 as a partner.  He had previously practiced law in New York for 10 years, and prior to that he clerked for the U.S. Circuit Judge J. Skelly Wright of the U.S. Court of Appeals for the District of Columbia Circuit.  Mr. Herfort also served as an assistant to U.S. Attorney General Elliot Richardson.

Representative cases or matters on which Mr. Herfort was lead counsel, trial counsel, or in which he argued the appeal include: