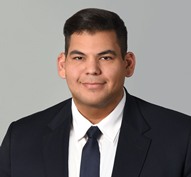 ​​Stephen Herndon is an associate in the Los Angeles office of Gibson, Dunn & Crutcher.  He is a member of the firm’s Private Equity, Mergers and Acquisitions, Media, Entertainment and Technology, and Securities Regulation and Corporate Governance Practice Groups.

Mr. Herndon is a member of the California Bar, and is admitted to practice before the United States District Court, Central District of California