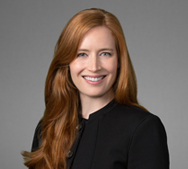 Rachael Jensen is an associate in the Dallas office of Gibson, Dunn & Crutcher. She is a member of the firm’s Appellate & Constitutional Law Practice Group.

Before joining the firm, Ms. Jensen clerked for the Honorable Denny Chin of the United States Court of Appeals for the Second Circuit.

Ms. Jensen graduated with Honors from the University of Texas School of Law. While in law school, she served as Chief Articles Editor for The Review of Litigation, Teaching Assistant for Professor Robert Chesney’s course on cybersecurity law and policy, and Research Assistant for Professor Stephen Vladeck, with whom she worked on multiple cases before federal, state, and military courts, including the United States Supreme Court, the Texas Supreme Court, and the Court of Appeals for the Armed Forces. She also participated in the Supreme Court Clinic, and was the first student to argue as amicus before the Army Court of Criminal Appeals.

Ms. Jensen received her B.A. in Communication from the University of Arkansas, where she developed her award-winning research in political rhetoric.