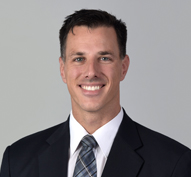 Bart Jordan is a litigation associate in the Orange County office of Gibson, Dunn & Crutcher.  He currently practices in the firm’s Litigation Department, where he is a member of the White Collar Defense and Investigations and the Labor and Employment practice groups.

In his white collar practice, Mr. Jordan represents corporations, audit committees, and individuals in internal and white collar criminal investigations and before government agencies in matters involving securities violations, whistleblower claims, and the Foreign Corrupt Practices Act.  In his labor and employment practice, he represents companies in wage-and-hour, harassment, and discrimination matters which range from large class actions to individual arbitrations.

Prior to attending law school, Mr. Jordan provided consulting services to a number of U.S. government agencies in the Washington, D.C. area and throughout the Middle East as a member of the Intelligence Community.  Mr. Jordan, a United States Marine Corps veteran, also served two tours in Iraq as an Arabic Cryptologic Linguist and Signals Intelligence Team Leader.  Mr. Jordan maintains a professional fluency in Arabic, which he frequently uses in his work.