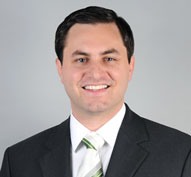 Taylor King is an associate in Gibson, Dunn & Crutcher’s Orange County office. He is a member of the firm’s Litigation and Intellectual Property practice groups. His practice focuses on complex commercial litigation with a focus on patent litigation and appeals. Mr. King has experience in all phases of litigation from pre-suit due diligence and negotiations to trial and appeal, and he has been involved in cases involving a range of technologies, including electronics, encryption, medical devices, e-commerce, vehicle emissions, sporting goods, and pharmaceuticals. Mr. King also has experience in complex cases involving a variety of other issues, including trademarks, copyrights, antitrust, internal investigations, and product liability.

Mr. King served as a law clerk to the Honorable Kathleen M. O’Malley of the United States Court of Appeals for the Federal Circuit from 2016 to 2017. He also was an associate at the firm prior to his clerkship.

Mr. King graduated with high honors from the George Washington University Law School, where he was elected to the Order of the Coif and served as a member of the George Washington Law Review. In 2010, he earned his Bachelor of Science degree in civil engineering from Brigham Young University. Mr. King is a member of the California bar, and he is admitted to practice before the Federal Circuit and the Central District of California.