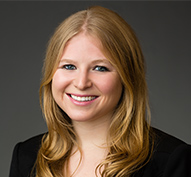 Lauren Myers is an associate in the New York office of Gibson, Dunn & Crutcher, where she is a member of the firm’s Litigation Department.  Ms. Myers has experience litigating complex commercial disputes, employment matters, and representing media and entertainment companies.  Ms. Myers also has significant experience with government investigations involving multiple government agencies across a wide variety of industries including technology, finance, real estate, and manufacturing.

Ms. Myers played a leading role in a groundbreaking victory before the United States Supreme Court.  Ms. Myers was part of a team that represented a group of small New York landlords and the Rent Stabilization Association of NYC, Inc. in a constitutional challenge to New York State’s COVID-19 eviction moratorium.  In its ruling, the Court held that the moratorium scheme violated “the Court’s longstanding teaching that ordinarily ‘no man can be a judge in his own case’ consistent with the Due Process Clause.”  According to Reuters, the decision marked the first time the Supreme Court granted an emergency injunction to private litigants outside the religious liberties context since the inception of the pandemic, after nearly 100 prior applications had been denied.

University of Michigan - 2014 Bachelor of Arts