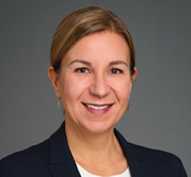 Rebecca Lesnik is an associate in the New York office of Gibson, Dunn & Crutcher. She is a member of Gibson Dunn’s Real Estate Practice Group.

Ms. Lesnik earned her Juris Doctor in 2012 from Columbia Law School, where she was a James Kent Scholar and a Harlan Fiske Stone Scholar. She received her Bachelor of Arts in English from Yale University in 1996, where she graduated with distinction in the major.

Ms. Lesnik is admitted to practice in the State of New York.