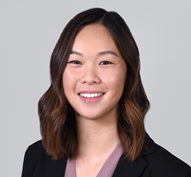 Adrienne Liu is an associate in the Los Angeles office of Gibson, Dunn & Crutcher. She currently practices in the firm’s Litigation Department.

Prior to joining Gibson Dunn, Ms. Liu clerked for the Honorable Harris L. Hartz of the U.S. Court of Appeals for the Tenth Circuit.

Ms. Liu is admitted to practice law in the State of California and before the U.S. Court of Appeals for the Tenth Circuit.