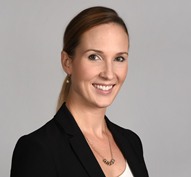 Ana Mihanovic is an associate in the Los Angeles office of Gibson, Dunn & Crutcher.  She currently practices in the firm’s Litigation Department.  Prior to joining the firm, Ms. Mihanovic served as a law clerk for the Honorable Philip S. Gutierrez of the U.S. District Court for the Central District of California.

Ms. Mihanovic earned her law degree from UCLA School of Law, where she was elected to the Order of the Coif.  During law school, Ms. Mihanovic was a Managing Editor for the UCLA Law Review and received the Masin Academic Excellence Award in International Human Rights Law.  She also served as an extern for Justice Steven Z. Perren of the California Court of Appeal and spent five months working in the trial division of the Office of the Prosecutor at the United Nations International Criminal Tribunal for the Former Yugoslavia in The Hague, Netherlands.

Ms. Mihanovic is admitted to practice law in the State of California.

University of Utah - 2009 Master of Arts

University of Utah - 2005 Master of Music

University of Utah - 2002 Bachelor of Music