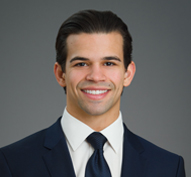 Joseph Moita is an associate in the New York office of Gibson, Dunn & Crutcher, where his practice focuses on real estate and tax.

He graduated with a bachelor’s degree in financial economics and a minor in computer science from Columbia University, where he competed on their NCAA DI Varsity Wrestling Team for four years.

Mr. Moita is admitted to practice in the States of New York and California.