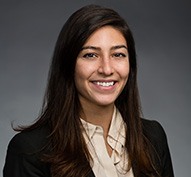 Maya Hodis Nuland is an associate in the New York office of Gibson, Dunn & Crutcher. She practices in the firm’s Litigation Department, where she focuses on health care enforcement matters.

Ms. Nuland received her Juris Doctor in 2015 from Yale Law School. While at Yale, she served as a Managing Editor of the Yale Journal of Health Policy, Law, and Ethics.  She earned her Bachelor of Arts degree in Economics in 2009 from Wesleyan University and was elected to Phi Beta Kappa.

From 2016 to 2017, Ms. Nuland served as a law clerk to the Honorable Robert W. Sweet of the United States District Court for the Southern District of New York.  She is admitted to practice in the State of New York.