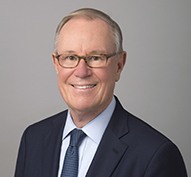 John F. Olson is a founding partner of Gibson, Dunn & Crutcher’s Washington, D.C. office.  Mr. Olson represents business organizations in corporate governance, corporate securities, corporate finance and merger and acquisition matters.  He has counseled many boards of directors and board committees of leading public companies in the United States and abroad on governance issues and the conduct of internal investigations.  He has represented firms and individuals before the Securities and Exchange Commission and other federal agencies in both regulatory matters and enforcement investigations.

In 2006, Mr. Olson led a team of the firm’s lawyers that advised the Board of the American Red Cross on a comprehensive audit of its governance practices.  He has since advised the United States Olympic Committee and a number of other nonprofit organizations on governance issues.

Mr. Olson has served as Chairman of the ABA Business Law Section’s Committees on Corporate Governance and Federal Regulation of Securities and on the Publications Board and Council of the Section. He was a member of the Presidential Task Force on Corporate Responsibility appointed by the President of the ABA.  He has served for many years as a member of and liaison to the Business Law Section’s Corporate Laws Committee. For the Section, he chaired task forces which prepared a comprehensive report on insider trading laws and several editions of the Corporate Director’s Guidebook. He served on the ABA’s Standing Committee on Governmental Affairs.

Mr. Olson is a member of the Executive Council of the Federal Bar Association Securities Section, served for nine years on the Legal Advisory Committee of the New York Stock Exchange and was a member of the Legal Advisory Board of the National Association of Securities Dealers. He served on a select committee of leading securities lawyers, appointed by the chairman of the Senate Banking Committee, which drafted insider trading legislation introduced in the United States Congress.

Mr. Olson was elected to NACD/Directorship Magazine’s Corporate Governance Hall of Fame in 2013.  He is regularly ranked among the top securities advisory attorneys in the District of Columbia by Chambers USA and has been listed every year since 2007 in Who’s Who of Corporate Governance Lawyers by Who’s Who Legal.  He was named the Washington, DC Corporate Law Lawyer of the Year for 2013 and the Washington, DC Corporate Governance Law Lawyer of the Year for 2012 by The Best Lawyers in America®.  Mr. Olson was also named a 2019 National Litigation Star for White-Collar Crime and Securities by Benchmark Litigation.

Mr. Olson has been selected by his peers for inclusion in The Best Lawyers in America® in every edition published since its inception 30 years ago.

A frequent lecturer at legal and business seminars, Mr. Olson co-chairs several programs on an annual basis.  He serves on the planning committees for the San Diego Securities Regulation Institute and the Practising Law Institute’s Annual Securities Regulation Institute.  He is the author of more than 100 articles and a member of the editorial advisory boards for a variety of securities and corporate law publications.  Mr. Olson is the co-author of Director and Officer Liability: Indemnification and Insurance, published by West Publishing (revised 2002) and has edited several other books on securities law issues.

Mr. Olson was the Distinguished Visiting Practitioner in Residence at Cornell Law School in 2003, and from 2005 through 2007 taught corporate governance at Northwestern University School of Law.  He is currently a Distinguished Visitor from Practice at Georgetown University Law Center, teaching courses in securities regulation and governance of nonprofit organizations.

Mr. Olson serves on the boards of directors of the Abramson Scholarship Foundation and Washington Performing Arts.  He is a life member of the American Law Institute, served on the International Reference Team for Company Law Reform in South Africa, and served as a Trustee of the Committee for Economic Development. He is a Trustee and was the founding Chair of the American College of Governance Counsel.