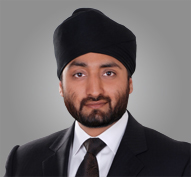 Hardeep Plahe is an English-qualified partner and cross-border transactional lawyer based in the Dubai office of Gibson, Dunn & Crutcher.  He is a member of the firm’s Mergers and Acquisitions, Capital Markets and Financial Institutions Practice Groups.

Mr. Plahe’s has a broad and deep knowledge of the Middle East business landscape. He has been based in the Middle East since 2006. He was based in London prior to that. He has helped clients navigate their way through some of their most complex and important transactions in the UK, Continental Europe and the Middle East. He has advised private equity clients, financial institutions, corporates, sovereign wealth funds and governments.

Most recently, he was ranked as a leading Corporate/M&A lawyer by Chambers Global 2019, in which one impressed client noted: “We have no formalities, I can pick up the phone at any time and he’s available”. In recent years Chambers Global has also remarked that he is “extremely useful”,  a “brilliant practitioner” and “he is very much a thinker and also a great listener: he will listen to issues and form solutions around them”, his “strong reputation for finance and corporate work”, his “practical approach, hard work and strong experience”, and as being “a name to watch in the UAE”. Mr. Plahe is also recommended for Corporate and M&A in Legal 500 EMEA 2019 and Investment Funds in Legal 500 EMEA 2015. In addition, he has been recognised by IFLR1000 “for his quality and efficiency” and is listed as a leading lawyer for UAE – Mergers & Acquisitions in their 2014 edition. Mr. Plahe has been recognized by Best Lawyers® in their 2017 edition in the fields of Corporate Law and Mergers & Acquisition Law.

Prior to joining Gibson Dunn, Mr. Plahe practiced with Linklaters, resident in the London office from 2001 and in the Dubai office from 2006, where he served as one of the founding members of the office.  In 2003 he was seconded for six months as counsel to the Private Client Services division of Credit Suisse in London advising on a range of issues, including the sale of securities into the Middle East.

University of Oxford - 1998 Bachelor of Arts