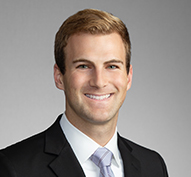 Bennett Rawicki is a litigation associate in Gibson Dunn’s Dallas office.  He primarily practices in the fields of antitrust, consumer protection, and constitutional law.  His experience covers a wide variety of industries, including pharmaceuticals, e-commerce, health care, advertising, credit repair, aviation, and energy.

In the Dallas community, Mr. Rawicki serves on the Board of Directors for the St. Thomas More Society of Dallas and the Crusader Alumni Soccer Fund.

Mr. Rawicki is a member of the State Bar of Texas, and has been admitted to practice before the U.S. District Court for the Northern District of Texas and the U.S. Court of Appeals for the Seventh Circuit.

University of Dallas - 2009 Bachelor of Arts