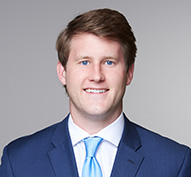 Jacob Rierson is a litigation associate in the Denver office of Gibson, Dunn & Crutcher.  His expertise primarily focuses on labor and employment matters and large government investigations.  He also maintains a robust pro bono practice.

Mr. Rierson advises clients on a broad range of labor and employment issues, in both litigation and the ordinary course of business.  He represents clients in a variety of civil actions, such as those concerning trade secrets, unfair competition, breaches of covenants, retaliatory discharge, and wage-and-hour disputes.  His practice encompasses all phases of litigation, including leading forensic investigations at the fact-gathering stage and leveraging complex procedural rules to clients’ advantage in the months leading up to trial.  He also guides clients in implementing arbitration programs, voluntary severance programs, reductions-in-force, and other employment-related efforts.  In addition, Mr. Rierson counsels clients on how to comply with numerous federal and state statutes and regulations, such as Title VII, the Age Discrimination in Employment Act, the Older Worker Benefits Protection Act, and the Health Insurance Portability and Accountability Act.

Mr. Rierson also has experience assisting clients in navigating complex government investigations.  This experience includes defending a global pharmaceutical and medical device company in an investigation across numerous countries by the U.S. Department of Justice and the Securities and Exchange Commission into alleged securities fraud and Foreign Corrupt Practices Act violations, counseling a global technology company in an investigation by the Federal Trade Commission into allegedly deceptive trade practices, and defending a major energy corporation facing FCPA investigations by the DOJ and SEC.

Additionally, Mr. Rierson is an active pro bono practitioner.  He has represented a Salvadoran national in her effort to secure asylum in the United States, individuals in early-stage asylum proceedings being detained in advance of their credible fear interviews, and an individual incarcerated in a Colorado prison in his effort to obtain relief under various international treaties.

Mr. Rierson earned his law degree in 2016 from the University of Chicago Law School, where he was recognized as a Donald E. Egan Scholar. During law school, Mr. Rierson won a state Freedom of Information Act appeal against the City of Chicago through the Police Accountability Clinic, helped overturn a client’s wrongful conviction through the Exoneration Project Clinic, and secured asylum for a family through the Iraqi Refugee Assistance Program. Mr. Rierson graduated with distinction from the University of North Carolina at Chapel Hill in 2011, earning degrees in U.S. History and Anthropology.

Prior to attending law school, Mr. Rierson taught elementary school as a Teach For America corps member in Denver.

Mr. Rierson is admitted to practice law in the State of Colorado.