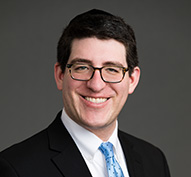 Louis Rosenberg is an associate in the New York office of Gibson, Dunn & Crutcher. He currently practices with the Firm’s Real Estate Practice Group.

Prior to joining Gibson Dunn, Mr. Rosenberg served as a law clerk for the Honorable Peter J. Walsh, United States Bankruptcy Court, District of Delaware. Mr. Rosenberg graduated cum laude from Georgetown University Law Center. While there, he served as a student law clerk for the Honorable Royce C. Lamberth, United States District Court for the District of Columbia. Mr. Rosenberg earned his Bachelor of Arts in economics, with minors in chemistry and philosophy, from Swarthmore College, where he owned and managed a storage and moving company. Mr. Rosenberg also spent two years studying Jewish ethics, law, and philosophy at Machon Shlomo, a yeshiva in Jerusalem.

Mr. Rosenberg is admitted to practice in the States of New York and New Jersey.