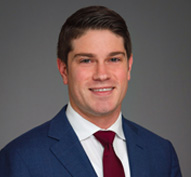 David Sterngold is a corporate associate in the New York office of Gibson, Dunn & Crutcher.

Mr. Sterngold received his Juris Doctor in 2018 from Duke Law School, where he was an Articles Editor for the Duke Law Journal and a Robert N. Davies scholar.  He graduated from Swarthmore College with high honors in 2012, majoring in Political Science and minoring in History.  At Swarthmore, David was a forward on the men’s soccer team and a writer for both school newspapers.

Mr. Sterngold is admitted to practice in the State of New York.