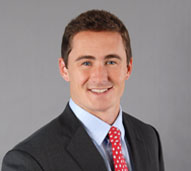 In addition, Mr. Twomey frequently practices before both the United States Court of Appeals for Veterans Claims and the United States Department of Veterans Affairs, representing U.S. veterans on a pro bono basis in claims for service-connected medical benefits.  Mr. Twomey also supervises law students handling veteran’s benefits appeals through pro bono programs at the University of California at Irvine School of Law and the University of Virginia School of Law.

Mr. Twomey was recognized in The Best Lawyers in America® 2022 Ones to Watch in Entertainment and Sports Law.