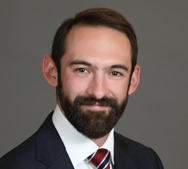 Mr. Vierra also maintains an active pro bono practice.  Recently, he was part of a team that secured a favorable settlement for a California prison inmate for violation of his First Amendment rights.  Mr. Vierra currently represents several immigration clients in removal proceedings and an Army veteran seeking benefits for trauma sustained during service.

Mr. Vierra graduated from Stanford Law School and Stanford University in 2018, where he earned his Juris Doctor and Master of Arts in Economics, respectively. At Stanford, Mr. Vierra was a Gregory Terrill Cox Fellow in the John M. Olin Program in Law and Economics. Mr. Vierra graduated from the Massachusetts Institute of Technology in 2015 with a Bachelor of Science in Engineering and was a member of the Pi Tau Sigma Mechanical Engineering Honor Society.

Mr. Vierra is admitted to practice law in the State of California.