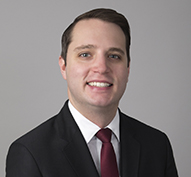 Joshua M. Wesneski is an associate in the Washington, D.C. office of Gibson, Dunn & Crutcher. He practices in the firm’s Appellate and Constitutional Law, Administrative Law and Regulatory Practice, and Litigation groups.

Mr. Wesneski has represented clients in a wide variety of appellate matters in the state supreme courts, the federal courts of appeals, and the U.S. Supreme Court. He maintains an active trial-level practice, and was a member of the defense team in the first ever antitrust class-action suit involving both direct and indirect purchasers tried before a single jury, prevailing after a trial lasting several weeks. Mr. Wesneski also advises and represents clients in proceedings before administrative agencies.

Before joining the firm, Mr. Wesneski worked as a litigation associate in a New York law firm. Mr. Wesneski thereafter clerked for Judge Barrington D. Parker, Jr. of the U.S. Court of Appeals for the Second Circuit and Judge Kenneth M. Karas of the U.S. District Court for the Southern District of New York.

University of Oklahoma - 2011 Bachelor of Arts