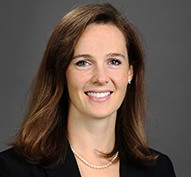 Before joining the firm, Ms. Yarger clerked for Associate Justice Clarence Thomas on the United States Supreme Court and prior to that practiced at a Denver trial boutique where she defended clients against large consumer products liability class actions and medical malpractice claims. Ms. Yarger has tried two jury trials to verdict.

After graduating from law school, Ms. Yarger clerked for the Honorable Allison H. Eid of the Colorado Supreme Court and the Honorable Neil M. Gorsuch of the United States Court of Appeals for the Tenth Circuit.

Ms. Yarger is a member of the Colorado General Counsel Group (CGCG) Advisor Program.  She is also an active member in the United Way “Read With Me” program, supporting child literacy.