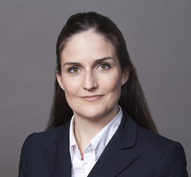 Caroline Ziser Smith is a Special Legal Consultant in the Washington, D.C. office of Gibson, Dunn & Crutcher LLP, practicing in the Firm’s White Collar Defense and Investigations and Antitrust practice groups.  A graduate of Cambridge University, Ms. Ziser Smith’s practice is truly global.  She is admitted to practice in England and Wales as a solicitor-advocate, Ireland, and California, and is licensed to practice as a Special Legal Consultant in the District of Columbia.  Ms. Ziser Smith is bilingual in English and German, and she is also proficient in French.

Ms. Ziser Smith has extensive experience in working in matters involving multi-national corporate clients across a number of industries, including the financial services and automotive industries.  She specializes in complex multi-jurisdictional investigations, concerning fraud and antitrust issues in particular.  She has worked on matters pending before government authorities around the world, including the U.S. Department of Justice, the U.S. Securities and Exchange Commission, the U.S. Environmental Protection Agency, the California Air Resources Board, the European Commission, the U.K. Serious Fraud Office, the U.K. Competition and Markets Authority, the Swiss financial regulator FINMA, the Swiss competition authority WEKO, the Brazilian competition authority CADE, the Mexican competition authority COFECE, and numerous other international criminal, competition, and regulatory agencies.  Ms. Ziser Smith also regularly advises clients on the enhancement of corporate compliance programs.

Ms. Ziser Smith is a member of the American Bar Association and the British German Jurists’ Association as well as the Firm’s DC Diversity Committee.

Ms. Ziser Smith moved from Gibson Dunn’s London office to its D.C. office in 2018. Prior to joining Gibson Dunn in London in 2011, Ms. Ziser Smith trained at a leading UK law firm where she spent six months seconded to the Paris office.

* Admitted in California, England & Wales and Ireland only. Not admitted to the DC Bar; practicing as a Special Legal Consultant in DC.