Despite the overall decline in shareholder activism activity, certain trends continued unabated. During the period spanning July 1, 2019 to December 31, 2019, two of the 23 companies targeted by activists—Instructure, Inc. and Occidental Petroleum Corporation—were the subject of multiple campaigns. The activism campaign launched by activist Carl Icahn against Occidental Petroleum Corporation was supported by activist Krupa Global Investments. In addition, certain activists launched multiple campaigns during the second half of 2019: Carl Icahn, Elliott Management, Land & Buildings, Sachem Head Capital Management and Starboard Value. These five activists represented 42% of the total public activist actions that began during the second half of 2019. 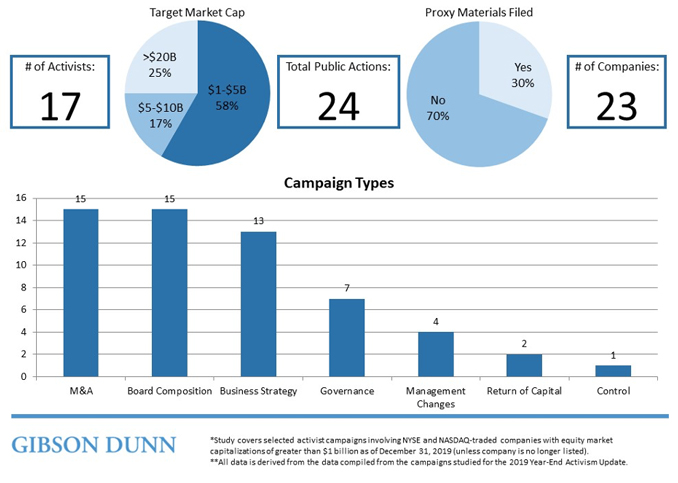 The diminution in shareholder activism activity brought with it a decline in publicly filed settlement agreements. Only five such settlements were filed during the review period, which is the lowest number observed for a half-year-period since 2014. Those settlement agreements that were filed had many of the same features noted in prior reviews, however, including voting agreements and standstill periods as well as non-disparagement covenants and minimum and/or maximum share ownership covenants. Expense reimbursement provisions were included in approximately half of those agreements reviewed, which is consistent with historical trends. We delve further into the data and the details in the latter half of this Client Alert.

Though not covered in this Client Alert, we note that early indications suggest that the COVID-19 pandemic has caused a decline in shareholder activism activity during the first half of 2020. However, some activists may see opportunities in market dislocation to increase pressure on certain targets and/or to increase their positions in certain companies opportunistically. These trends may be borne out in both the types of targets on which activists focus as well as in the rationales for the campaigns that activists launch. We will analyze these trends in detail during our next shareholder activism update.

We hope you find Gibson Dunn’s 2019 Year-End Activism Update informative. If you have any questions, please do not hesitate to reach out to a member of your Gibson Dunn team.

Gibson Dunn’s lawyers are available to assist in addressing any questions you may have regarding the issues discussed in this publication. For further information, please contact the Gibson Dunn lawyer with whom you usually work, or any of the following authors in the firm’s New York office: