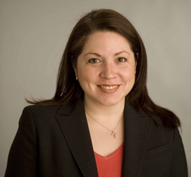 Ms. Barrett also has substantial experience in complex civil litigation matters and has represented national and multi-national companies in a wide variety of civil disputes in various federal and state courts and before arbitration panels.  Ms. Barrett has represented clients in regulatory investigations before several government agencies and has played a significant role in several internal investigations.

Representative matters in which Ms. Barrett has played a key role include:

Ms. Barrett devotes significant time to assisting non-profit organizations with intellectual property issues, particularly with the protection of their trademark rights through trademark prosecution and cease and desist efforts.  Recently, Ms. Barrett has provided assistance in this capacity to, among others, the Women’s Heart Alliance, Do Something!, The Human Rights Foundation, and Not Impossible Labs.

Ms. Barrett earned her law degree in 2001 from Georgetown University Law Center, where she was editor-in-chief of the Georgetown Law Weekly. Prior to attending law school, Ms. Barrett spent three years working for an entertainment management company in Los Angeles, California, where she assisted with drafting and negotiating touring and sponsorship agreements for clients in the music and motorsports industries. She received B.F.A. and B.A. degrees from Florida International University in 1992.