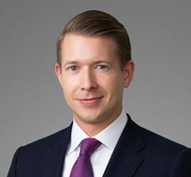 Ben Betner is an associate in the Houston office of Gibson, Dunn & Crutcher LLP.  He is a member of the Firm’s Litigation Department and has advised and represented clients in state and federal court proceedings in a wide range of subject matters, including energy, technology, financial services, and admiralty. He has also represented clients in front of most of the major international arbitral institutions.

Prior to joining the firm, Mr. Betner was an associate at Vinson & Elkins LLP, where he focused his practice on complex commercial litigation.

Mr. Betner received his law degree, with honors, from the University of Texas at Austin School of Law, where he was selected as a Brumley Fellow in National Security Law and served as the Deputy Managing Editor for the Texas Review of Law and Politics.

Prior to practicing law, Mr. Betner served in the U.S. Army, working in Military Intelligence, and deployed to both Afghanistan and Iraq.

Mr. Betner is a member of the State Bar of Texas and is admitted to practice before the U.S. District Courts in the Southern, Eastern, and Western Districts of Texas.