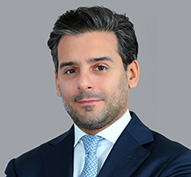 Hanna Chalhoub is Of Counsel in the Dubai office of Gibson, Dunn and Crutcher. He also practiced out of Gibson Dunn’s New York office for 18 months. He is a member of the firm’s Private Equity and Mergers and Acquisitions practice groups.

Mr. Chalhoub is recommended for United Arab Emirates: Commercial, Corporate and M&A by Legal 500 EMEA 2022, which noted the team is “commercial, responsive/available, deploy diverse teams. Pleasant to work with”. In previous years, clients have noted the team is: “extremely commercial and able to leverage global insight quickly and efficiently”.

Mr. Chalhoub received his law degree, with honors, from Saint-Joseph University in Beirut. Additionally, Mr. Chalhoub received a professional Masters in Litigation, Arbitration and Alternative Dispute Resolution, with honors, from the French section of the Lebanese University. He was awarded a Fulbright scholarship in 2008 and received a Master of Laws (LL.M.) from the University of Arizona’s James E. Rogers College of Law, where he won the Munger Prize for Scholars in International and Business Law.

Mr. Chalhoub is a member of the Beirut Bar Association and is admitted to practice in the State of New York. He is fluent in English, French and Arabic.