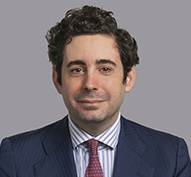 Federico Fruhbeck is a partner in the London office of Gibson, Dunn & Crutcher.  Mr. Fruhbeck is Co-Chair of the Projects and Infrastructure Practice Group, Head of Private Equity in Europe, and a member of the Mergers and Acquisitions and Capital Markets practice groups.

Mr. Fruhbeck’s practice focuses on cross-border M&A transactions across Europe and Latin America for private equity clients and large family-owned conglomerates, with a particular focus in the infrastructure, ESG and real assets sector.  He also advises both issuers and underwriters on capital markets transactions, particularly in high-yield issuances (including green bond issuances) and initial public offerings.  He has extensive experience across multiple jurisdictions, with a particular focus on Spain, Italy, Germany, France and the Nordic region.

Mr. Fruhbeck is named in The Lawyer’s Hot 100 2022 list, which recognises the most daring, innovative and creative lawyers.  He is also recognised by Legal 500 UK 2023 for Infrastructure and private equity: transactions – high-value deals (£250m+). He was also recognised by Law.com/LegalWeek as one of the Rising Stars in private equity in 2021, and also nominated for the British Legal Awards in 2021 as a Rising Star – Private Practice. Mr. Fruhbeck is a frequent speaker and contributor on private equity and infrastructure, as well as on climate change and ESG matters.

Prior to joining Gibson Dunn, Mr. Fruhbeck was a partner at Vinson & Elkins in London, and also practiced with Simpson Thacher & Bartlett in New York and London.

*Some of these representations occurred prior to Mr. Fruhbeck’s association with Gibson Dunn.