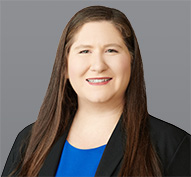 AnnElyse Scarlett Gains is a partner in the Washington, D.C., office of Gibson, Dunn & Crutcher and is a member of the firm’s Business Restructuring and Reorganization Practice Group.  Her practice focuses on corporate restructurings, distressed financing, liability management transactions, and other special situation transactions in acquisitions, out-of-court restructurings, and Chapter 11 cases.  Ms. Gains advises boards of directors, board committees, and senior management on a range of issues, including fiduciary duties and corporate governance, as well as investors, purchasers, and other stakeholders evaluating strategic transactions with target companies facing actual and potential economic stress.

After law school, Ms. Gains served as a clerk for the Honorable Peter J. Walsh (ret.) in the United States Bankruptcy Court for the District of Delaware.

Ms. Gains is a military-spouse and enjoys giving back to the military and veteran community.  Her pro bono practice focuses on the representation of veterans and  she has experience representing veterans with claims for trauma-related disabilities.  She is also an active member and a former Board Member of the Military Spouse JD Network.

Ms. Gains is admitted to practice in the state of New York and the District of Columbia.  She is a member of the American Bankruptcy Institute and International Women’s Insolvency & Restructuring Confederation.