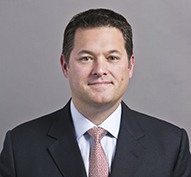 ​Christopher Haynes is an English qualified corporate partner in the London office of Gibson, Dunn and Crutcher.

Chris has extensive experience in equity capital markets transactions and mergers and acquisitions including advising corporates, investment banks and shareholders on initial public offerings (including multi-track processes), rights issues and other equity offerings as well as on public takeovers, private company M&A and joint ventures. He also advises on corporate and securities law and regulation.

Chris is recognised as a leading lawyer by Chambers, IFLR1000 and Legal 500.  In Legal 500 2023 he is described by clients as being a “standout partner” and the team is praised for its “partner lead engagement” and being “great to work with”, and in the 2022 edition he is described by clients as “one of our most trusted business advisers” and as providing advice that is “excellent”.  In Chambers 2023 clients note that he provides “excellent client service” and has “strong commercial acumen” and that the practice comprises “an excellent and experienced senior team”. In prior editions of Chambers he has been described as being “hugely capable in all corporate and transactional matters”, “really good, commercial and gets stuff done”, “extremely user-friendly”, “a pleasure to work with”, “excellent” and “extremely strong when situations are stressful”.

Chris practiced with Herbert Smith Freehills LLP from 1998 to 2016 and became partner in that firm in 2002.  Prior to that he was a solicitor with Bell Gully in New Zealand.

University of Auckland - 1995 Bachelor of Commerce