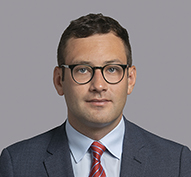 William Lord is an English-qualified associate in the London office of Gibson, Dunn & Crutcher. Mr. Lord is a member of the firm’s Dispute Resolution Group.

Mr. Lord advises clients in the context of all forms of dispute resolution, including litigation, arbitration and mediation.

Prior to joining Gibson Dunn, Mr. Lord trained and practiced at the London and Hong Kong offices of an international law firm and spent six months on secondment to a leading hedge fund company.

Mr. Lord graduated from the University of Cambridge with a First Class Honours degree in Chinese Studies and also studied at Peking University, Beijing. He speaks Mandarin Chinese.

He was admitted as a Solicitor of the Senior Courts of England and Wales in 2019 and has rights of audience before the civil higher courts.