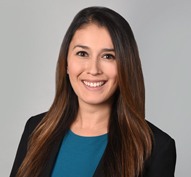 Ms. Montoya Iles received her J.D. from Stanford Law School in 2015.  While at Stanford, Ms. Montoya Iles served as an Executive Board member of the Stanford Latino Law Students Association and participated in the school’s Mills Legal Clinic.

She earned her Bachelor of Arts in English, with a minor in French, from the University of California, Los Angeles in 2012.

Ms. Montoya Iles is admitted to practice law in California and Colorado.