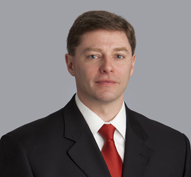 Daniel W. Nelson practices in the Litigation Department as co-chair of the Environmental Litigation and Mass Tort Practice Group, and he is a member of the Class Action and Complex Litigation, Antitrust and Trade Regulation, and Appellate and Constitutional Law Practice Groups.

Mr. Nelson has a national complex litigation practice.  He has served as the lead defense counsel for clients in the courts of more than 30 states, and he has defended more than 200 class action lawsuits, including as lead trial counsel in securing a defense verdict in a certified class action jury trial.  He has represented clients at the trial and appellate levels in cases that span a wide range of areas, with a particular focus on environmental and mass tort litigation, complex business litigation, antitrust litigation, and class action litigation.

Mr. Nelson’s litigation expertise and client service are widely recognized.  The National Law Journal recognized Mr. Nelson as a “trailblazer” in its first edition of Energy & Environmental Trailblazers for his innovative and effective strategies for resolving environmental mass tort litigation, and Mr. Nelson has twice led Gibson Dunn’s Washington, DC office to be named the Product Liability / Mass Torts Litigation Department of the Year by the National Law Journal.  In 2021, Mr. Nelson was recognized as a member of Lawdragon’s inaugural “Leading Environmental and Energy Lawyers.”  Based on surveys of corporate counsel, BTI Consulting Group has twice named Mr. Nelson as a BTI Client Service All-Star.  BTI recognized Mr. Nelson for his “true thought leadership; innovation; creativity applied to the client; focused, practical problem-solving; valued counsel; responsiveness and accessibility; total commitment to the client.”