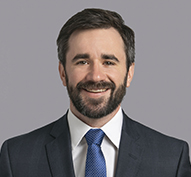 Ben Nunez is a New York qualified associate in the London office of Gibson, Dunn & Crutcher. He is a member of the firm’s antitrust and competition practice group.

Mr. Nunez has broad experience advising on a wide range of antitrust issues, including abuse of dominance, civil cartel enforcement, market investigations, and merger control. He has particular sectoral regulatory experience in the energy and pharmaceutical sectors.

Prior to joining Gibson Dunn, Mr. Nunez spent more than 7 years at the UK competition authority, most recently as Assistant Director within the legal services department. During his time at the authority, he advised on a portfolio of Phase 1 merger cases involving the telecommunications, software, digital payments, insurance, and logistics sectors. He also worked on the JD Sports/Footasylum Phase 2 merger, as well as the subsequent litigation before the Competition Appeals Tribunal and remittal case. He was also heavily involved in the most recent revision to the authority’s public guidance on the use of interim measures in merger cases. He was part of the core case team investigating competition concerns under Article 101 and 102 TFEU and Chapters I and II CA98 in relation to the supply of fludrocortisone in the UK. In that role, he gained comprehensive experience of civil cartel investigation from ‘dawn raids’, through the investigative stages to final decision, including commitments and settlement. He also worked on the Phase 2 energy market investigation, including both the administrative and remedies phases.