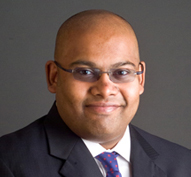 Saptak Santra is an English-qualified partner in the Singapore office of Gibson, Dunn & Crutcher LLP.  His experience focuses on lending and structured finance, asset finance, acquisition finance, financial restructurings, and general corporate M&A transactions, with a particular concentration in the energy (including renewable energy), infrastructure, and real estate sectors.  He is also a member of the firm’s Environmental, Social and Governance (ESG) Practice Group.

Mr. Santra has worked on some of the most high-profile transactions in Asia.  He has represented a number of major financial institutions, governments, and multinational corporations such as Berkshire Hathaway Energy, Mizuho Bank, The Royal Bank of Scotland, ING Bank, Wachovia Insurance, CIBC, Société Générale, Coface, Siemens AG, Vietnam Airlines, the British government, the Government of Laos, Chevron, TNK-BP, UBS, and Merrill Lynch on transactions throughout Europe, the Middle East, and Asia.

Mr. Santra was born in Royal Leamington Spa, England and is admitted as a solicitor of the Supreme Court of England & Wales.

The College of Law - Chester - 1995 Diploma in Legal Practice