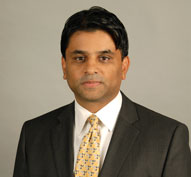 Jay Srinivasan is Co-Partner in Charge of the Los Angeles office of Gibson, Dunn & Crutcher, where he practices in the firm’s Antitrust and Trade Regulation Practice Group with a focus on intellectual property and technology-related issues.  Mr. Srinivasan represents a wide range of clients in the energy, entertainment, medical, and high tech industries in litigation, and also provides antitrust advice in the context of mergers/joint collaborations, government investigations, and proposed business practices.  In addition to his antitrust practice, Mr. Srinivasan specializes in complex business litigation and class action defense.

Mr. Srinivasan received his Juris Doctor from the New York University School of Law, in 1995.  He received his Bachelor of Science degree in Electrical & Computer Engineering from the University of Illinois in 1991, after which he worked for a software company in Silicon Valley.

University of Illinois - 1991 Bachelor of Science