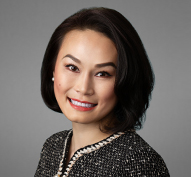 Stella received her Juris Doctor with High Honors from The University of Texas School of Law in 2015. While at The University of Texas School of Law, she was installed as Chancellor of the Class Year of 2015 – a member of the law school’s most prestigious honor society. She was also a recipient of presidential scholarships in law and elected to the Order of the Coif.  Stella is a life member of the Texas Law Review.

Stella has been recognized as a Best Lawyers: Ones to Watch in America™ in the area of Energy Law. She has also been elected to Rising Stars for 2021-2022 and recognized as Top Rated Mergers & Acquisitions Attorney by Super Lawyers©.

Prior to joining Gibson Dunn, Stella was an associate in the M&A/Private Equity Department of Kirkland & Ellis’ Houston office.

University of Texas - 2009 Master of Arts