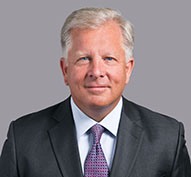 Stephen A. Thierbach is a US-qualified corporate partner in the London office of Gibson, Dunn & Crutcher.

A senior U.S. securities lawyer, he advises issuers, underwriters and selling shareholders on complex, innovative and multi-jurisdictional offerings of equity, equity-related and debt securities. He has a broad capital markets transactions practice, with a focus on initial public offerings and secondary offerings, and has represented corporates, investment banks, private equity firms and governments in transactions in the UK and other jurisdictions in Europe, the Middle East and Asia.

Prior to joining Gibson Dunn, Mr. Thierbach practiced with Herbert Smith Freehills since 2010, most recently serving as the Global Head of its Capital Markets Practice. Before that, he was a partner with Linklaters in London from 1995 to 2010, where he co-led its capital markets practice and served as head of the U.S. practice.  He was an associate at Sullivan & Cromwell in New York and London from 1987 to 1994.

Mr. Thierbach is recognized as one of the top equity capital markets lawyers in London by Chambers and Partners and he is ranked in the Hall of Fame listing for London equity capital markets by Legal 500. He is also recommended by Best Lawyers UK in the field of Capital Markets Law and IFLR1000 as highly regarded for Capital Markets: Debt and Equity.