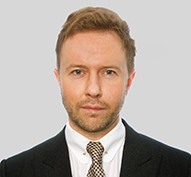 In addition, he has extensive expertise in reserves-based and other upstream oil & gas financing and financing for energy and commodity sectors and the telecoms industry in Asia.  Recently, he has been assisting a number of corporates, private equity funds and other alternative capital providers with alternative capital solutions such as Term Loan B, Unitranche and subscription line financings.

Prior to him and his team joining Gibson Dunn in January 2015, Mr. Thomas was a partner at White & Case, and before that, he spent seven years at Clifford Chance.

Mr. Thomas sits on various finance and restructuring committees in Asia.  He is Chair of the Indonesian Steering Committee of the Asia Pacific Loan Market Association (APLMA) and sits on the Singapore Documentation Committee and India Committee of the APLMA.  Mr. Thomas is a member of the Law Society of England and Wales.

Mr. Thomas has been lead partner on multiple major award-winning finance and restructuring deals in Asia.  For example, he represented:

Mr. Thomas gained his degree specializing in oil and petrochemical science at Manchester University in 1994 and he gained his law qualifications (CPE in 1995 and LPC in 1996) from the College of Law with commendation.

University of Manchester - 1994 Bachelor of Science