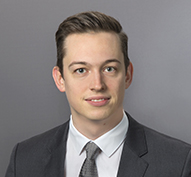 Bastiaan Wolters is an associate in the Frankfurt office of Gibson, Dunn & Crutcher. He is a member of the firm’s Global Finance, Mergers and Acquisitions and Private Equity Groups.

He studied law at the University of Hamburg, Germany, and at the University of East-Anglia, England. Before completing his Second State Examination at the Higher Regional Court of Frankfurt, Mr. Wolters was a trainee in the Frankfurt and Munich offices of renowned international law firms. He passed part of his legal clerkship at the Embassy of the Federal Republic of Germany in Vienna, Austria. Mr. Wolters has been admitted as a German lawyer (Rechtsanwalt) since 2021.

He is fluent in German and English.