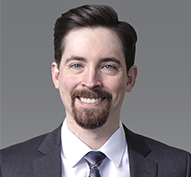 Andrew Blythe is a litigation associate in the Orange County office of Gibson, Dunn & Crutcher.  He practices in Gibson Dunn’s Intellectual Property Practice Group, with a focus on patent litigation.  Mr. Blythe has substantive litigation experience from complaint through appeal, including trials both in district court and before the United States Patent and Trademark Office.

Mr. Blythe is admitted to practice in the States of California and New York and as a registered patent attorney before the United States Patent and Trademark Office.